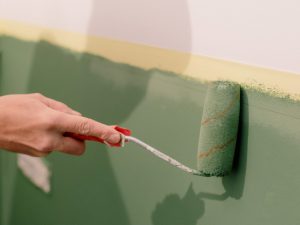 Excerpts of an interview with Mr. Amit Syngle, MD, and CEO of Asian Paints with ET Now on 22nd Oct 2021:

Demand strong ahead of festive and wedding season – Asian Paints

Demand has been buoyant in the festive season, according to Mr Syngle. He further added that staying at home has made people desire home improvement.

The Company is seeing a very strong growth trend because of the festivals coming in with the wedding season which is also around. So both these factors are giving very strong flavour to the market and that is the trend they are seeing in October as well.

Mr Syngle said that demand in tier-II, III and IV cities has been exceptional. The luxury segment in rural areas was picking up too.

The company sees demand from metros close to about 85% of the pre-COVID levels. For Tier-III and tier-IV, it sees a strong jump in terms of demand even better than pre-COVID times.

Mr Syngle added that the home décor business was growing much faster on a low base.

According to him, Asian Paints is not about just owning the walls, but space between the walls. The Company sees that trend coming in strongly and he sees a definite pick up in September in terms of people embellishing their homes not only with respect to walls but even with respect to the other areas which fill up space in the home.
Asian Paints is open to acquisitions that will bring in synergistic benefits.

Talking about the quarterly result he said, 3Q margins may be better than 2Q on stable inputs. The Company has lately witnessed input costs moving up due to demand.

We saw a lot of secondary demand come up across the cities and that has boosted our confidence that a lot of new demand has come in areas of painting, waterproofing and so on, says Amit Syngle, MD & CEO.

• His comments on 1QFY21 result: There was no business activity from 20th March to end of April due to the lockdown. The entire month of April was an absolute washout. A lot of pent up demand was seen in May and people had to look at some of those real pent up maintenance issues. Therefore, in May, there was very satisfying pent up demand across the country. However, a good part of it was seen in June, triggered by Asian Paint’s safe painting campaign which gave people confidence that it was safe to get a set of painters to get your house painted. A lot of secondary demand came up across the cities and that has boosted the company’s confidence that it was not only the pent up demand which we saw in May but a lot of new demand which came in both in the area of painting, waterproofing and so on. This was also led by another campaign which Asian Paints did with terrace waterproofing. A lot of demand which has come in the June is new paint demand and that has boosted confidence in the market.
• When asked about how confident he is of this new paint demand trend continuing he replied that the month of July has been more challenging in terms of the sporadic lockdown across various states. But till now, the indications have been good in terms of looking at how the paint demand is coming and he feels that today the trend is changing. Some of the tier one-tier two cities which were slow to kind of recover are recovering at a higher rate the surge was possibly shown at the smaller cities which were the tier three, tier four cities. He further added that there might be slowing down a little as Covid is spreading more into the hinterland but there is a balancing which is happening with respect to that and therefore the current indications are that volumes are still looking decent.
• When asked about the demand pattern of premium decoratives, he stated that some products are at the luxury and premium end and are also solutions based. If people are looking at that kind of an antibacterial protection for their homes, it is still value for money coming at the luxury end. But in general, there is a little bit of downtrading where people are coming down from the luxury end and looking at more premium products and upgrading far more strongly. A lot of discretionary spend is happening in terms of maintenance rather than absolutely décor. Therefore, he is of the view that a part of this painting has come in because people would like healthy and hygienic homes, fairly clean and beautiful homes
• His stated his views on pricing strategy: Overall, the company has been very cautious and is looking at ways and means in terms of better material costs, sourcing efficiencies and formulation efficiency. As of now, there is a little bit of neutrality coming because there is a rupee which has depreciated. Raw material prices are going up as demand comes back. Volatility will continue and he will be more focused in terms of internal efficiencies and going ahead, he doesn’t see any changes in terms of prices till the time there is a stability in terms of the environment we are in.

Excerpts of an interview with Mr. Amit Syngle, MD & CEO, Asian Paints which aired on CNBC TV18 on 4th May 2020: