Do REITs deserve a place in your portfolio? 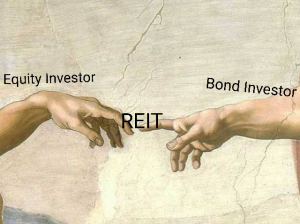 Real estate investment trusts are like mutual funds, where money is pooled from investors and units are allotted to them, which represent ownership in real estate assets. REITs invest in income-generating real estate properties. These income-generating real estate properties can be residential buildings where flats are rented, commercial office spaces, warehouses, hotels, shopping malls, airports, etc. In India, as of now, only commercial REITs are allowed to do business.

Speaking about India specific, a REIT will raise money from investors and either acquire a developed property or develop a property on its own. Later on, this property is rented to different tenants, which are predominantly corporate entities. The rent collected is then distributed to the unitholders after deducting all the necessary expenses.

Each REIT has a sponsor who acts as a trustee for the unitholders and owns the property on behalf of the unitholders. The day-to-day activities concerning the properties such as choosing the right tenant, negotiating the lease terms with the tenants, maintenance of the properties, etc are handled by a management team (REIT Manager) appointed by the sponsor.

Let’s look at some advantages of considering REITs as an investment:

Although there are no specific disadvantages of having a small exposure to a REIT, here are certain difficulties a REIT, as a business, can face, which will eventually affect the unit price and NDCF:

These are larger economic issues that will be faced by any other business along with a REIT.

In India, we currently have 3 listed REITs and while the Nifty 50 index is down 6% year to date, the REITs are up from 8.5% to 10.5% for the same period. Investors’ interest has come back to REITs with the opening up of the economy and higher occupancy levels of the office spaces. The only limitation here is that of limited options as there are only 3 REITs and 1 International REIT Fund of Fund in India. This significantly limits the choices for investors.

Update on Indian market: Nifty ended almost flat on Thursday (+0.03%). Within NIFTY stocks, top performers were Tata Motors (+8.1%), Coal India (+7.3%) and ONGC (+5.3%) and worst performers were HDFC (-2.8%), Indiabulls Housing (-2.3%) and ICICI Bank (-2.2%). Among the sectoral indices, best performers were Metal (+2.6%), Auto (+2.1%) and Media (+1.6%). Worst performing sectors were Realty (-1.8%), financial services (-1.2%) and Pvt Banks (-0.8%). RBI has mandated linking of housing and auto loan rates to the repo rate or other external benchmarks 1st October onward. Stock prices of HFCs (Housing Finance Companies) were down owing to the fear that HFCs will have to reduce their lending rates to remain competitive, effectively putting pressure on NIMs (Net Interest Margin). Auto stocks reacted positively to the same as lower borrowing costs to the customer can boost demand for vehicles.

·        In HDFC’s core business of housing finance, massive growth is seen in affordable housing. HDFC has launched a dozen projects in the last 3 months across Indian cities. Apartments that fit in the Pradhan Mantri Awas Yojana (PMAY) are selling fast. 70-80% is sold on the launch day.

·        Real estate is in bad shape for homes that are larger and unaffordable.

·        The spiral down has continued after demonetization. The developers need help as without them there is no supply. There is a massive amount of unsold inventory and lack of fresh lending to the developers.

·        Regulators have to look at developers differently in terms of NPA recognition. Even if the developer is not able to build a phase due to demand shortage and is not able to repay the loan, he is sitting on the value in the form of land. When the demand picks up, the value will materialize.

·        50% of incomplete apartments need last-mile funding where 80%-90% work is complete. That should be done on an urgency basis. This will also boost confidence on the street. Currently, people prefer to buy a finished home rather than under-construction property as many people have booked under-construction flats and are still waiting. A solution could be a stressed asset fund initiated by National Housing Bank (NHB).

·        When IL&FS went down, it did not impact the Indian financial system. India has a strong financial base and a couple of players collapsing is not going to have a big impact.

·        Interest rate action helps in case of a slowdown but it is not the ultimate reason for the slowdown to go away. Self-confidence and confidence in buyers is required. India is a consumption-oriented economy and one or two-quarters slowdown is just part of the game. Even the auto industry has had phenomenal sales for many years and a slowdown for a few quarters will not have much impact.

·        The feeling is that slowdown will be short-lived. Good weather, upcoming festive season and easy availability of credit will cause spending.

·        Consumption as a % of GDP is very low in India, less than half of China. So that has to grow. Even if there is a global slowdown, it is not so in India.

·        Ease of doing business in India has to improve. Large funds of billions of dollars have not yet invested long-term money in India. India specific funds have come in but global funds, sovereign wealth funds have just started looking at India. Still, massive amounts of investments can be expected from Australia, Canada and Japan. The sovereign wealth funds are underinvested in India but are looking at viable companies, good promoters and good track record.